Reviews – A selection of some of Iceapelago’s reviews.

Iceapelago is a work of fiction in the thriller and speculative fiction sub-genres and was penned by author Peter Brennan. Breaking into the new cli-fi (climate fiction) genre with some hard-hitting science and some incredible and disastrous predictions, this is a thriller set in an Ireland where winter has come to stay forever. Following three separate storylines through the formation of the titular Iceapelago, the novel is told through many different perspectives at worldwide locations. As seemingly separate climate and geological events catch the attention of the world’s scientists, so the pieces fit together and the true disaster looms. What results is a fascinating work of chain reactions in a future that looks frighteningly real.

Plot-driven readers will really enjoy the top-down view and switching perspectives of author Peter Brennan, whose varied travels and extensive research bring us many unique perspectives as we witness a true global disaster. It is clear that the author is well-read and well informed on the climate change emergency, with factual information driving the work that hardcore readers will really get their teeth into. A little tough for the casual reader at first, this cli-fi piece grows in atmosphere, thrills, and tension as it progresses, both educating and entertaining its readers at the same time. What results is a genuinely terrifying and authentically voiced narrative of a near-future world nothing like our own, and overall I would highly recommend Iceapelago to all climate fiction readers looking for something solid and engrossing. 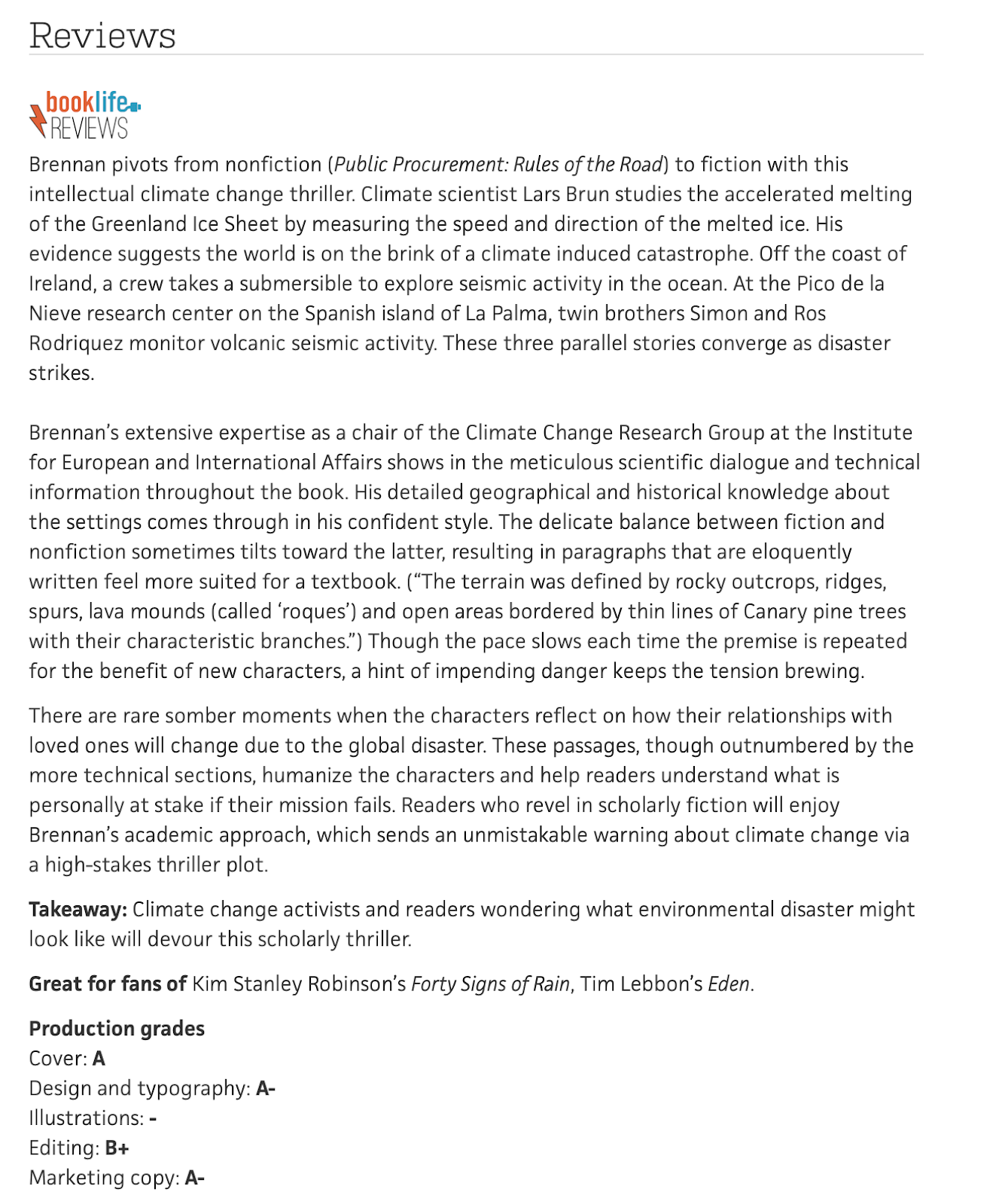 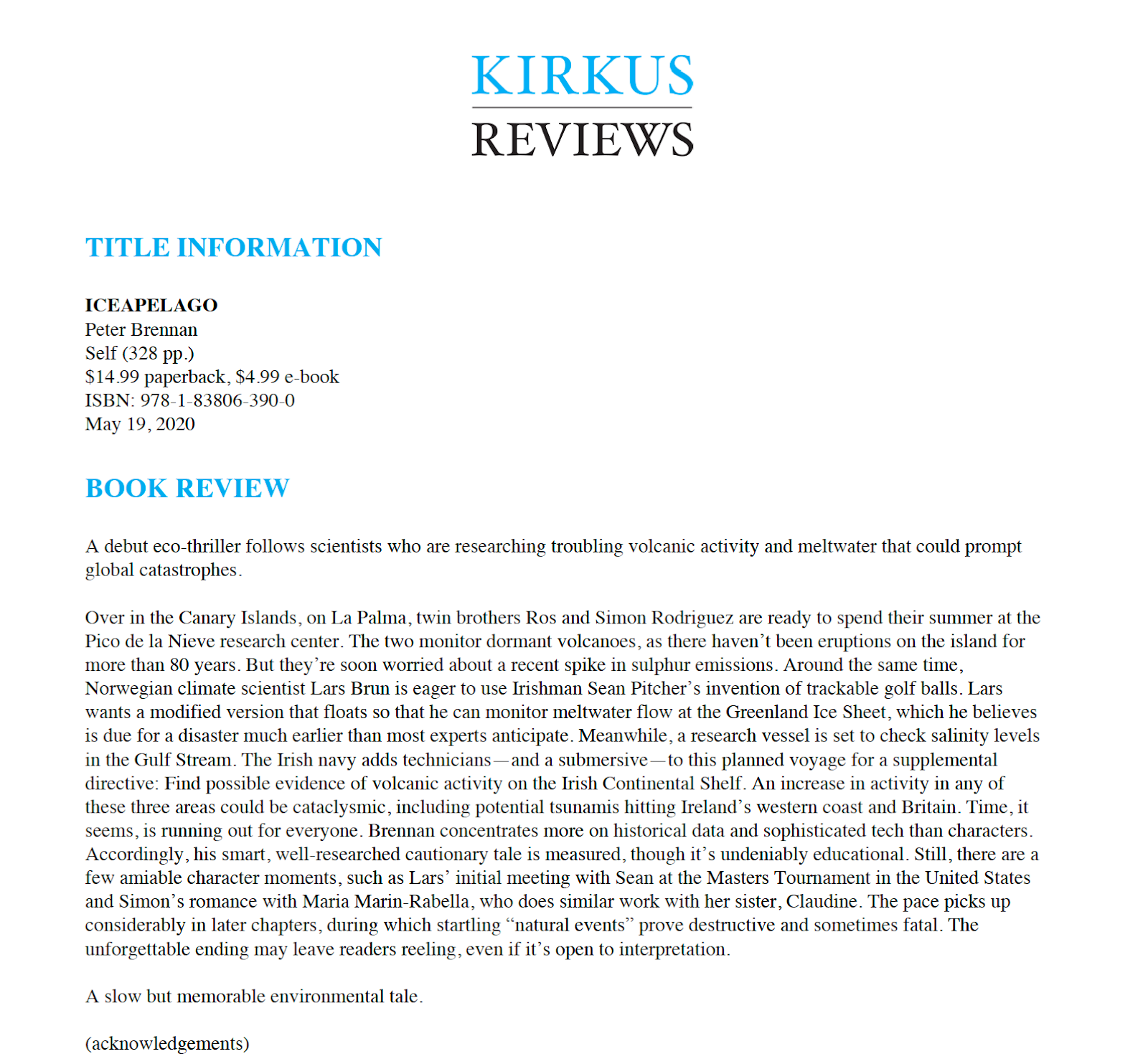 Iceapelago by Peter Brennan takes us deep inside the scientific arguments of climate change. In three separate story arcs, the author describes the catastrophic changes that are happening to our planet; from increased seismic and volcanic activity right across the Atlantic Ridge, through to the disastrous melting of the Greenland ice cap and the subsequent flooding of the North Atlantic with fresh melt-water that will shut down the Gulf Stream current that keeps areas like Ireland, Great Britain and Scandinavia temperate despite their northerly latitudes. On the Greenland ice cap, scientists are experimenting with a new concept that may help them better map the changing flows of melt-water under the ice cap. In the North Atlantic, a research vessel and its underwater mini-submarine are collecting samples of salinity and unexpected seismic activity in the waters north of Ireland and on the Canary Island of La Palma a team of young post-grad scientists is monitoring and becoming aware of subtle changes in the previously long-dormant volcanoes of the island. Are all these events in some way linked to climate change and is the earth on the edge of a tipping point that will throw giant tsunamis at us and plunge large parts of the planet into a cataclysmic and violent climate change, heralding a new ice age?

For a fiction story, Iceapelago is stunningly realistic and frighteningly prescient. Author Peter Brennan’s research appears to be impeccable and one is left with the feeling that this is less a novel and more a documentary along the lines of An Inconvenient Truth. This seems so very real as one reads that you have to remind yourself it is just a novel. This is perhaps best described as an action/adventure and the action is realistic and rapid. The character development is relatively minor in comparison to the action and this is exacerbated somewhat by the three simultaneous story arcs but that being said, there is still plenty to like and admire in the young volcanologists on La Palma and their passion for their chosen field of study. It was easy to empathize with all these characters who put their duty to their careers and their commitment to advancing the knowledge of humanity ahead of any concerns for their own personal safety. What I particularly enjoyed was the author’s detailed descriptions of the raw beauty of the surroundings and the incredible power and destruction of Mother Nature. I also enjoyed that the author was prepared to hold nothing back in his plot lines and there was little left to argue about with his ultimate conclusions. When a novel makes you think seriously and deeply about real-world concerns, the author has achieved their objective. This author has done so with this book and I can highly recommend it.

Iceapelago by Peter Brennan is a dystopian environmental fiction thriller and the first book in the author’s Iceapelago series. The book lays its foundation with a chilling look at a future where climate change has altered the world as we know it, taking the landscape back to conditions not seen in over 20,000 years. It is determined by scientists to be a ‘when’, not an ‘if’, as the cataclysmic impact shifts the earth’s vista into an icy tundra. The build-up to Brennan’s new ice age is marked out through a chain of events that usher in environmental collapse due to the planet’s most destructive inhabitants. The rapid melting of an ice sheet and rising sea levels, the disruption of the Gulf Stream, and the eruption of a previously latent pyroclastic volcano that triggers tsunamis all foretell the natural conclusion to a wholly unnatural desecration by man. Through the points of view of multiple characters and a traversing of the globe, Brennan delivers the inaugural backstory to a book series with sweeping environmental ramifications that feel eerily true to life.

There’s no question that Peter Brennan has an intimate familiarity with the scientific aspects of Iceapelago, but what I found to be the most surprising was the depictions of the places the characters occupy. “This was God’s place, where mountains, summits, rivers, and lakes had no names. Undiscovered remoteness. Wide-open nothingness. Pure beauty.” The writing is intelligent and one could probably argue that it has a little more substance than style, but that same tag was also attributed to Tom Clancy whose method I am reminded of as I immersed myself in Brennan’s work. The sense of foreboding hangs over the storyline throughout, showcasing a unique stripe of tension that plays well into an end-of-the-world construct, far better than the usual cheap action shots. The greatest asset Brennan leverages after his intensive knowledge and descriptions is the realism instilled so there is no suspension of disbelief required. That’s huge in a dystopian novel. It takes a minute to get into Iceapelago, but once I was in, I was hooked. I’m looking forward to its follow-up, Aftermath.